The World Cup may be a few years away, but for soccer fans, the countdown is already on. Here at Roadtrips, we know just how exciting it is to be watching those matches live from the stands, and we just can’t wait to get to Qatar with our guests and experience the next World Cup.

If you don’t know much about the event, or you just want to brush up on your World Cup facts, check out our ultimate guide below.

What is the World Cup? 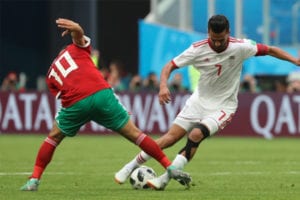 The World Cup is an international soccer tournament contested by senior men’s national teams from various countries. It is one of the most popular international sporting competitions and over 3 billion people tuned in to watch the 2014 tournament.

Fans travel from all over the world to follow their favorite teams as they compete against some of the most talented players in soccer.

The World Cup is made up of teams from six different continental zones – Africa, Asia, Europe, North and Central America and the Caribbean, Oceania, and South America.

How often is the World Cup?

The World Cup is played every four years and has been since the inaugural tournament in Uruguay in 1930, except in 1942 and 1946 when it was not held because of World War II. Qualification for the World Cup can begin as early as three years before the last tournament and can last for two years.

Why is the World Cup every four years?

The four-year gap between each World Cup tournament allows time for the qualification tournaments and play-offs to take place. While many of us would love to see the World Cup happen every year, I’m sure we can all agree it’s too big of an event and too special to be rushed!

In 2018, for the first time in the history of the World Cup, all 211 member nations entered the qualification process for the World Cup. With Russia automatically qualifying as the host country, the remaining 210 nations competed for the remaining 31 places during 872 matches.

France defeated Croatia 4-2 in the 2018 Final to claim their second World Cup title. The last time France won the World Cup was in 1998, when they also served as host country for the tournament.

How is the World Cup different to soccer at the Summer Games?

The World Cup tournament is longer and contains more matches and teams than the Summer Games. To compare, the 2018 World Cup consisted of 32 national teams and a total of 64 matches. At the 2016 Summer Games, there were 16 teams and 32 matches.

The other big difference between the two events is the age limit for the Summer Games tournament. The Summer Games regulations require players to be under 23 years of age, with each team allowed three overage players.

How do teams qualify for the World Cup?

Due to the number of teams competing for a spot in the tournament, the qualifying stage spans two to three years depending on the region. Teams in each region compete in a series of regional qualifier matches to determine who will represent their nation and win one of 31 coveted spots in the World Cup tournament.

At this point, the qualification details have not been announced.

What country has won the most World Cups?

Brazil has one the most World Cups with five. Italy and Germany are close behind with four each.

How many times has the USA won the World Cup? 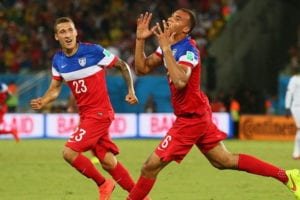 Despite soccer’s growing popularity in the USA, their national team has never won a World Cup. Or perhaps we should say, not yet?

How does USA qualify for the World Cup? 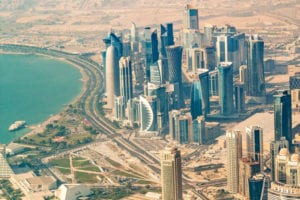 The next World Cup is the 2022 World Cup in Qatar, which will begin on November 21 and culminate with the World Cup Final on December 18. The tournament takes place every four years.

Qatar’s subtropical desert climate results in very hot summers, with highs averaging between 90 and 110 degrees. As the temperature often exceeds these averages, it’s far from ideal — and even downright dangerous — for playing soccer. As part of their winning bid for hosting the World Cup, Qatar agreed to stage the tournament in November and December, where typical temperatures are in the 70s and 80s.

Countries who are interested in hosting the World Cup must first submit an application, in which they must outline why they would be the perfect location and include their plans for stadiums, transport and accommodation for soccer fans. The host country has minimum expectations to meet to qualify and if they meet them a vote is then cast to determine the next host.

The tournament will take place across a number cities in USA, Canada, and Mexico. The 2026 World Cup will also see the number of teams in the tournament increase from 32 to 48.

How and why did Qatar get to host the World Cup?

The World Cup host is determined by a bidding process. Qatar was one of eleven nations who indicated an interest by the February 2009 deadline. Six nations would later withdraw their bids, leaving five countries remaining when the voting process began: Qatar, USA, South Korea, Japan, and Australia. There were a total of four rounds of voting, with one country eliminated each round. On December 2, 2010, it was announced that Qatar would host the 2022 World Cup.

Qatar will make a wonderful host for the 2022 World Cup. Though it may be small, it boasts some incredible contrasts and impressive sights. You’ll find beautiful beaches (Qatar has 563 km of coastline along the Persian Gulf), incredible architecture in the urban centers, and fascinating landscapes including stunning sand dunes, limestone rock formations, and gorgeous mangroves.

For the World Cup, visitors will benefit from Qatar’s small size. All the world cup venues will be clustered within a small area, none more than 55 kilometers (35 miles) from Doha. This will make it easy for fans to travel to multiple matches in different stadiums, while basing themselves in one location (rather than traveling around from city to city, staying in multiple hotels). 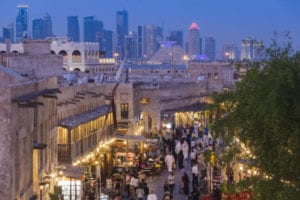 While Qatar can be very hot in the summer, during the World Cup in November and December the weather will cool down, though we’ll use that term loosely as average highs are in the 70s and 80s fahrenheit.

As is usual when traveling outside of your home country, you’ll also find both differing customs and common practices but with some preparation and a willingness to be flexible, travelers will easily be won over by Qatar’s charm.

What will the Qatar World Cup stadiums and cities be like? 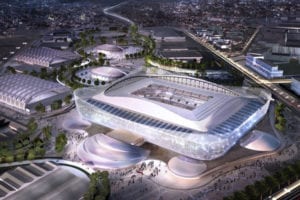 The 2022 World Cup stadiums will be some of the most impressive yet. Of the eight confirmed stadiums, only one (Khalifa International Stadium) is currently open, after having undergone a renovation in 2017. The remaining stadiums are either under construction or still in the planning stages and they will most definitely impress visitors.

What will the dress code be like in Qatar for the World Cup?

Qatari men and women typically dress in traditional clothing, which is quite modest. While foreigners are not expected to uphold the same standards, it is appreciated and recommended that visitors are sensitive to the values of the local people, by wearing clothing that covers the shoulders and knees.

Will the Qatar World Cup venues be air conditioned?

The 2022 World Cup Stadiums will be state-of-the-art and use cooling technologies to ensure that both the players and the spectators stay cool and comfortable.

Do I need a visa for Qatar?

Most visitors will not require a visa to enter Qatar. Currently, 80 different countries, including the USA, Canada, and Mexico, are permitted visa-free entry for stays of up to 30 days. A valid passport is required for entry. We recommend reviewing the requirements before you travel to ensure you have the most up-to-date entry information. Our pre-travel concierge team can assist with any questions regarding travel documentation and requirements.

What is the format of the World Cup tournament? 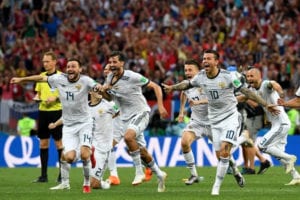 Prior to the tournament, a draw is used to split the 32 teams into eight groups, consisting of four teams each. The four teams in each group will play each other once, with the winner and runner-up advancing to the next stage: the knockout stage, also referred to as the round of 16.

Winners of the knockout stage will then proceed to the quarterfinals, with the winners advancing to the semi-finals, and eventually the Final or third-place match.

This will change with the introduction of 48 teams in 2026, when the number of matches will jump to 80, and an additional knock-out round will be added.

How many matches are played in the World Cup?

How many teams play in the World Cup?

Since 1998, there have been a total of 32 national teams represented in each World Cup. This will again be the case in Qatar in 2022.

Moving forward, even more teams will have the opportunity to experience soccer’s biggest tournament. It has been announced that 48 teams will compete in the 2026 World Cup tournament in the USA, Mexico, and Canada.

What do you get for winning the World Cup?

In addition to the pride and fame that comes along with becoming a national hero, the winning team is awarded the World Cup Trophy. While the team gets to enjoy the much-imagined celebration with the trophy after the final, they don’t get to take it with them. Instead they’re sent home with a replica.

What happens if there is a tie?

If there is a tie at the end of a World Cup group stage match, the result is a draw and the teams each receive one point. Once the tournament moves into the knockout rounds, two 15-minute periods of extra time will be played. At the end of the 30 minutes, if the match remains tied, the teams will go to penalty kicks (best of five). If that still doesn’t determine the winner, the penalty kicks will continue one at a time until the tie is broken.

What is the format of a World Cup match?

World Cup matches consist of two 45-minute halves with a running clock. Following each half, the referee may add stoppage time, to make up for time lost due to injuries, penalties, and anything else that disrupts the play. If they game is tied following the 90 minutes and stoppage time, extra time may be played as described above.

How big is a World Cup soccer field? 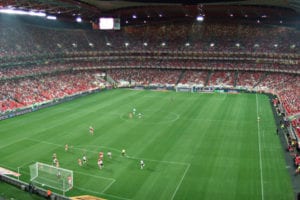 What is a “Group of Death”?

The group of death in the World Cup is a group which is particularly competitive, because the number of strong teams in the group is greater than the number of qualifying places available for the next phase of the tournament.

What is the Women’s World Cup?

The Women’s World Cup follows a similar format to the men’s tournament. A total of 32 teams (expanded from 24 in 2019) will earn a spot in the tournament with the host country guaranteed a spot. A draw is used to divide the teams into eight groups of four.

When is the World Cup Draw?

The World Cup Final Draw is tentatively scheduled for April 2022, with a date yet to be determined. We’ll be sure to update you as soon as we have more details on the 2022 World Cup Schedule.

The World Cup is one of the world’s most widely viewed sporting events and takes place every four years to determine the world champion. The World Cup tournament will take place in Qatar from November 21 to December 18, 2022. Here is a list of 28 fun and interesting World Cup facts to get you into the soccer spirit for the 2022 World Cup in Qatar: