The Wimbledon Championships is one of the most prestigious tennis tournaments in the world today and is the only grand slam still played on grass. But if you go back in history, it had a very humble and rather unremarkable beginning. We’ve compiled some of our favorite facts and most asked questions about this hugely popular event. 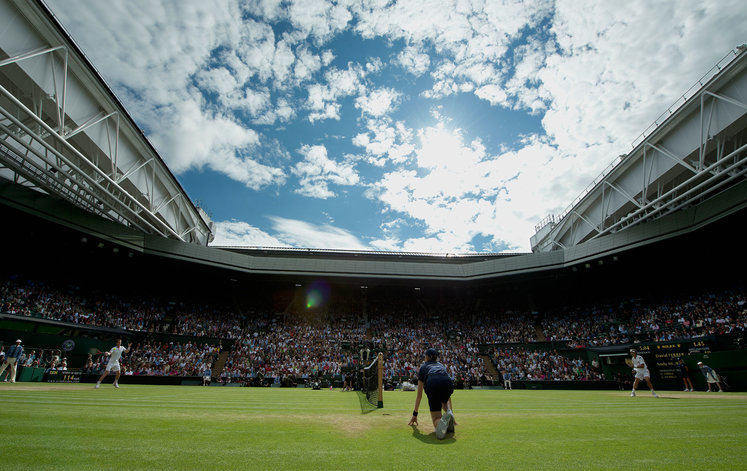 Where is the Wimbledon Tennis Championship played?

The Wimbledon Championships are played on the grass courts of the All England Lawn Tennis Club (AELTC) in Wimbledon, London, England. The AELTC was the original home of the tournament and remains so to this day.

When was the first Wimbledon tournament held?

What is the history of the Wimbledon Tennis Championship?

The very first Wimbledon Championships looked a lot different than they do today. The field was made up of 22 amateurs, who paid 11 shillings to enter after seeing an advertisement in a leisure magazine. A total of 200 spectators were there to watch the historic final match.

Who won the first Wimbledon Championship?

The winner of the first Wimbledon Championship was Spencer Gore, who was also an accomplished cricket player. There was no ladies’ final in the inaugural tournament; women did not compete until 1884.

What is the original form of the sport played at Wimbledon?

Who are the current Wimbledon champions? 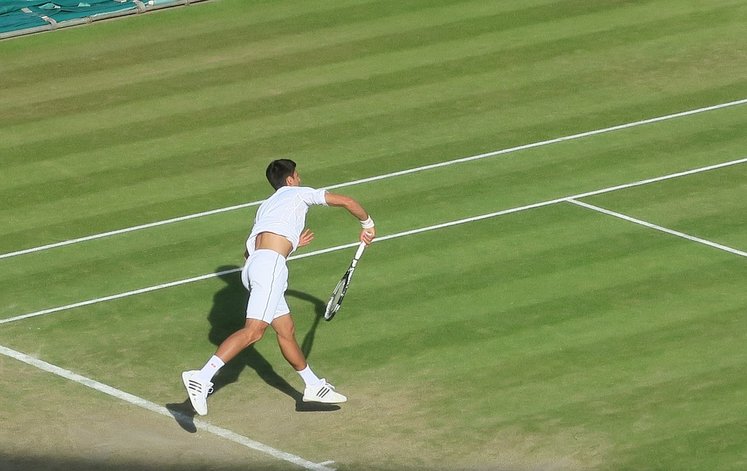 What are some unforgettable moments in Wimbledon history?

Wimbledon’s long history has seen many unforgettable moments. A few highlights include:

How many events does the Wimbledon tournament consist of?

How many matches are played at Wimbledon?

There is a total of 675 matches played during the Wimbledon Championships.

What is the schedule of the Wimbledon tournament?

The grounds of the AELTC generally open at 10:00 am daily and close 45 minutes after the last match. Play begins at 11:00 am on most courts. A more detailed schedule can be found here.

How long does the Wimbledon tournament last?

Wimbledon is scheduled for 14 days, beginning on a Monday and ending on a Sunday. In 2023, Wimbledon will take place from July 3-16.

How much prize money does the Wimbledon winner get?

The winners of each of the five main events were awarded the following:

When do the next Wimbledon Championships start?

The next Wimbledon Championships begin on Monday, July 3, 2023. 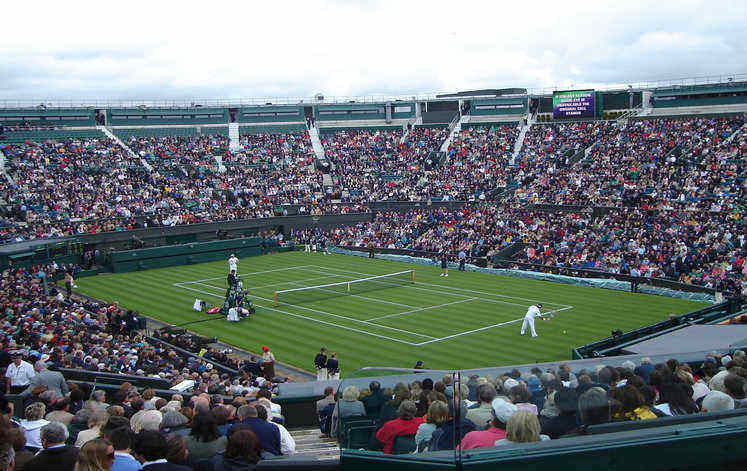 Wimbledon’s Centre Court is the main show court at the Wimbledon Championships and is the venue for the men’s and ladies’ championship finals. In 2009, a retractable roof was added to the court to provide protection from the elements, most notably the London rain.

How many people does Wimbledon Centre Court hold?

What are the best seats at Wimbledon Centre Court?

Though seating is largely a matter of personal preference, debenture seats are some of the finest tickets at Centre Court. In addition to the impressive sightlines, debenture tickets also provide access to the Exclusive Debenture Holder Lounge.

What is the Wimbledon Centre Court playing surface like?

The playing surface of Wimbledon Centre Court is grass, 100 percent perennial Ryegrass to be precise. The court is meticulously cared for throughout the year to make sure it’s optimal for competition. The height of the grass during Wimbledon is 8mm and it is cut daily for consistency. 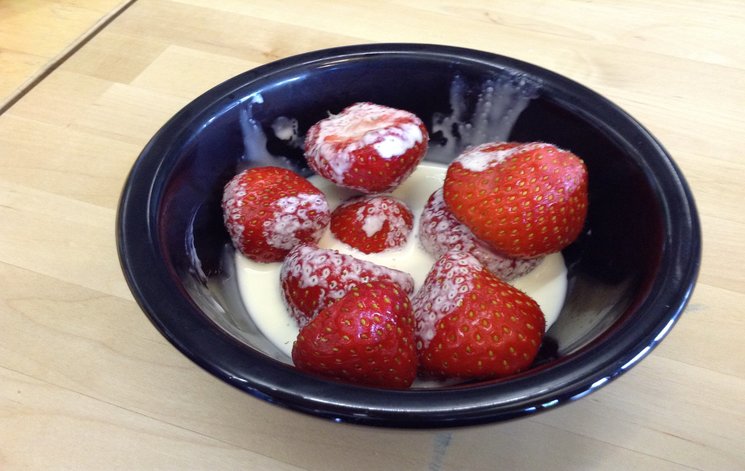 Who is Rufus the Hawk?

Rufus the hawk is the All England Lawn Tennis & Croquet Club’s way of keeping the pigeon population away. Rufus, who is a Harris’s Hawk, visits the club regularly throughout the year to deter local pigeons, including most mornings of the Wimbledon Championships. Rufus has been keeping the pigeons away for over 15 years.

Each year, about 250 ball boys and girls from nearby schools are chosen from close to 1000 applicants. They go through a fairly intense training and selection program to ensure the integrity of the role (Wimbledon’s ball boys and girls are considered some of the most elite in the sport). The average age of those selected is 15 years old.

It wouldn’t be Wimbledon without an appearance from the Royal Family. There has been a royal presence at Wimbledon since 1907. Most of the time, they’ll watch from the Royal Box which offers fantastic views of Centre Court. The 74 seats of the Royal Box aren’t exclusive to the royals, it is also offered to heads of government and other invitees of the AELTC.

Wimbledon has a unique way of referring to players at the tournament. Rather than using “men’s” and “women’s” matches, they use “gentlemen’s” and “ladies’”. In keeping with tradition and standard etiquette, the names of female players were prefixed with “Miss” or “Mrs” on the scoreboards up until 2009. Though they no longer do this, the umpires do still make announcements using these terms.

Why is there no advertising at Wimbledon?

Unlike almost every other major sporting event, you’ll find minimal advertising on the courts at Wimbledon. Those that do appear are small and limited to mostly black and white logos in order to highlight the lush green grass and dark green border. Sticking with tradition, Wimbledon chooses to preserve the aesthetic of their brand, favoring long-term partnerships with their trusted sponsors like Rolex, Slazenger, and Robinsons.

What is Middle Sunday at Wimbledon?

Traditionally, the Sunday sandwiched between the first and second week of the Wimbledon Championships was known as Middle Sunday. This was a day of rest for the players and fans with no tennis action. However, beginning with the 2022 Wimbledon Championships, the tournament eliminated this long-standing tradition and instead spread out its fourth-round matches over two days.

What celebrities come to Wimbledon?

Wimbledon is well known for its celebrity presence. Each year, dozens of prominent celebrities are spotted taking in a match from the Wimbledon Royal Box and elsewhere in the stadium. The last tournament was no exception, 2022 spectators included: 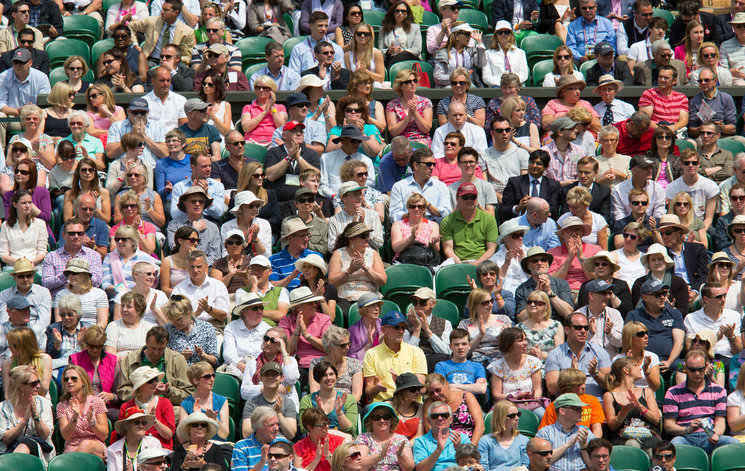 What is the Wimbledon Queue?

The Wimbledon queue is a lineup for same-day Wimbledon tickets that are made available to fans each day of the Wimbledon Championships (with the exception of the last four days on Centre Court). As one of the rare sporting events where attendees can by inexpensive tickets on the day of the event, the Wimbledon queue sees thousands of fans line up (or queue) for hours, many of them overnight, in a field near the stadium, hoping to receive one of a number of limited wristbands that represent the exact number of tickets available.

The Wimbledon dress code is serious business for its players. Though the requirements have changed over the years, the traditional all-white ensemble is still firmly enforced to this day.

What is the Wimbledon dress code for players?

Wimbledon has the strictest dress code of all the major Grand Slam tennis tournaments, which the All-England Club, where the tournament is played, takes very seriously. Wimbledon’s long-standing dress code requires players to wear (almost) all-white attire on The Championship courts. There are some very specific rules that players must adhere to including limiting color to a single trim no wider than one centimeter.

Why do Wimbledon players wear white?

The all-white dress code at Wimbledon dates back to the 1800s where it was considered uncouth, particularly for ladies, to have visible signs of perspiration on their clothing. The white attire helped in two ways: it was thought to keep the players cooler, and it didn’t show sweat quite as obviously as brightly colored clothing. The dress code is so strict that the players even need to make sure their underwear is white enough!

What is the Wimbledon dress code for spectators?

While there is no specific dress code for attending Wimbledon, spectators are expected to dress smartly. At Centre and Number One Courts,, there is a requirement for smart casual dress. Jackets and ties are not required, though they are often worn. Certain items including dirty trainers, active sportswear, and cutoff shorts are not permitted.

Traveling to the Wimbledon Tennis Championship: Map of Wimbledon

To help you plan your Wimbledon experience, we’ve included a map below for your convenience.

How to get tickets for Wimbledon

There are a number of ways to try and secure tickets for Wimbledon, but as one of tennis’s most coveted tickets, it’s not exactly an easy task.

Wimbledon typically opens their public ballot (draw) system for UK residents in September, and for overseas residents in December. A small percentage of those applicants will be selected and offered a designated day and court, chosen randomly by computer. Each day of the tournament, there are a few hundred tickets made available on Ticketmaster. These often sell out within seconds. Of course, there’s also the option to queue for tickets each morning as we described above.

Roadtrips’ Wimbledon Travel Packages include debenture Wimbledon tickets and their associated benefits as well as your choice of first class accommodations, on-site host services and many more optional extras.

How to get to Wimbledon

Due to the congestion on the roads, we highly recommend using public transport to get to Wimbledon. Options for getting to Wimbledon include:

Interested in a Wimbledon luxury travel package? Roadtrips can arrange a private vehicle and driver.

What are the best hotels in and around Wimbledon?

There are plenty of great hotels in and around Wimbledon. The Dog & Fox is just a short walk from the All England Lawn Tennis Club. Also within walking distance is the Hotel du Vin & Bistro Cannizaro House. Those looking to explore London’s biggest attractions in addition to the tennis may prefer something central like the iconic Ritz London, Corinthia Hotel London, The Savoy, The May Fair, Park Plaza Westminster Bridge, and the W London Leicester Square. While there are plenty of lovely hotels near Wimbledon, those looking for the best deals may want to look a little farther away. It’s important to note that hotels do book up quickly for the Wimbledon fortnight and it’s recommended that those with tickets plan their accommodations well in advance. There are a good selection (and descriptions of) hotels listed on our Wimbledon travel package hotels page.

What are some good things to see and do in and around Wimbledon?

There are so many incredible things to do in and around Wimbledon and quintessential British experiences to try. Some popular options include:

Of course, just outside of Wimbledon visitors have access to London’s biggest attractions including:

You can find more of our favorite things to see and do in London in our London luxury travel guide.

Wimbledon is steeped in history. The traditions themselves are famous, and the level of talent is unmatched. Of course, this event can be about so much more than the Centre Court, the Wimbledon attire and the food traditions. The Wimbledon tournament offers the chance to experience the great city of London, to stay at its finest hotels and to take in some amazing tours.

Get in touch with us to discuss how we can help you create the perfect Wimbledon trip!