Peppered amid Tokyo’s near-endless urban sprawl is a vast range of culturally diverse and lively neighborhoods. While this is great for anyone visiting Tokyo for the 2020 Summer Games (taking place in 2021), it also means you’re best setting out a roadmap for the areas you most want to visit.

Unlike many cities around the world, you can’t just head for Tokyo’s “city center” for a quick reconnaissance to get your bearings. For one, plenty of neighborhoods could stake a claim to being the beating heart of the capital. Furthermore, if you head to the literal center — the Imperial Palace — you may end up wondering what happened to all the gleaming skyscrapers and neon lights that have so embodied Tokyo in pop culture over the years.

In light of this, figuring out where to spend your time may seem like a Herculean task. But don’t worry, we have done the hard part for you. Split between the two Summer Games venue areas – the Heritage Zone & Tokyo Bay Zone – check out our breakdown of the top neighborhoods in Tokyo, along with the top attractions, experiences, restaurants and bars within them.

With emphasis on gymnastics, indoor events and watersports, here is the full list of Tokyo Bay Zone venues and arenas.

Odaiba, located in the futuristic Tokyo Bay area, is defined by its neo-modern architecture, immersive 3D art exhibits, and romantic pleasure boat cruises. Odaiba offers a glimpse into the future; a vision of the city Tokyo is striving to become: a high-tech, entertainment and cosmopolitan hub representative of its place among the world’s greatest metropolises.

One of the best ways to experience Odaiba is via a yakatabune (pleasure boat) tour, which often includes all-you-can-eat and all-you-can-drink services. A pastime formerly reserved for the imperial aristocratic classes, yakatabune now carry visitors of all stripes around the waters of Tokyo Bay, passing some of Odaiba’s most iconic landmarks in the process, including the Fuji TV building and the color-dappled Rainbow Bridge. From the yakatabune’s deck, you can also see Tokyo’s two tallest structures, Tokyo Skytree and Tokyo Tower, illuminating the night skyline.

On land, there is also plenty of fun to be had in Odaiba. Digital art collective teamLab have collaborated on various art projects around Tokyo; their Odiaba-based Borderless exhibition is among the most popular, where immersive 3D installations and interactive environments are designed to erode the border between the art and its viewers. Though not technically in Odaiba, Toyosu Market is just a stone’s throw away. The world’s largest fish market moved from its former location in Tsukiji in 2018 and is a culinary treasure trove of fresh sushi and sashimi.

For family fun in Odaiba, check out Joypolis, an amusement park and arcade based on IP from legendary video game company Sega, and the Gundam Statue inspired by the anime franchise of the same name. 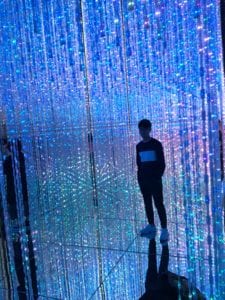 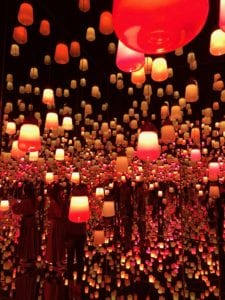 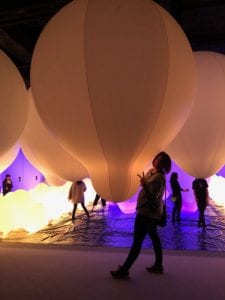 With emphasis on athletics, combat events and team sports, here is the full list of Heritage Zone venues and arenas. 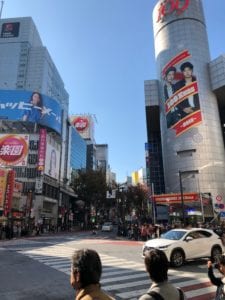 Of all Tokyo’s neighborhoods, Shibuya may well be the most iconic. Its number one attraction is the world’s busiest — and possibly most Instagram’d — intersection, Shibuya Crossing. Thousands of pedestrians approaching from all angles duck and weave routes to the opposite side as the traffic signal changes; this happens like clockwork from daybreak until the last trains depart around midnight. This unique urban marvel has contributed to the soaring popularity of “vantage point” seats in the Tsutaya bookstore’s Starbucks overlooking the intersection.

Shibuya Crossing connects the Hachiko Memorial Statue — depicting the eponymous dog who used to meet his owner at Shibuya Station at the same time everyday; a tradition Hachiko continued even after his owner’s death — with Centergai, a lively retail and bar street running through the heart of central Shibuya.

Another reason why Shibuya is among the best Tokyo neighborhoods to visit is Nonbei Yokocho, or “Drunkards Alley”, a couple minutes from Shibuya Station’s Hachiko Exit. This pair of lamplit street corridors are lined by miniscule and specialist bars, from homemade peppered gin and tonics in TIGHT (an indication of the establishment’s size) to vogue natural wines in Wine Stand Bouteille.

Though, aesthetically speaking, Shibuya is dominated by a towering skyline and interweaving elevated walkways, it’s also home to Yoyogi Koen, one of the prettiest parks in the city. Meiji Jingu, a shrine dedicated to the deified spirits of Emperor Meiji and Empress Shoken, sits in the midst of Yoyogi, guarded by a forest of over 100,000 trees which belies its downtown Tokyo location. 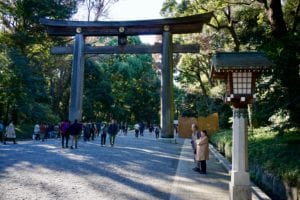 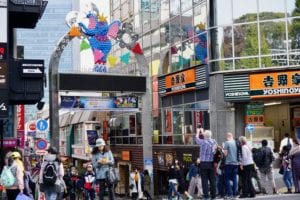 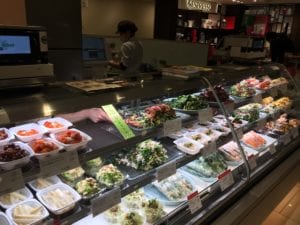 Alongside Shibuya, Shinjuku is arguably the most popular Tokyo neighborhood to visit. A center of retail, commerce and entertainment, it also represents the many faces of Tokyo, from its Hanazono-jinja and Shinjuku Junisu Kumano shrines to the labyrinthine Showa-Period (1926 – 1989) bars of Goldengai to the kitschy Robot Restaurant.

One of the main attractions in Shinjuku is the Godzilla statue, crawling over a skyscraper in Kabukicho, which periodically roars over the din of pachinko parlors, arcades, shops, peddlers and pedestrians filling the air with a cacophony of inner-city sound.

Shinjuku’s neon-lit caverns are packed full of restaurants, including Hanbey, a wartime izakaya (gastropub) serving cheap and delicious sharing plates, and the Robot Restaurant which frankly is more about the spectacle than its uninspired food. For drinks in Shinjuku, Golden Gai is not to be missed; it covers an area approximating the size of a football field, in which you can find around 250 themed bars.

For cultural offerings in Shinjuku, you can take a stroll through the well-kempt lawns and flower patches of Shinjuku Gyoen National Garden, visit one of the aforementioned Shinto shrines, or make a stop at the Yayoi Kusama Museum which celebrates the work of Japan’s foremost pop art trailblazer.

Shinjuku is also one of the best neighborhoods to stay in Tokyo; you can find our accommodation recommendations here. 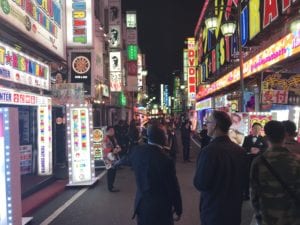 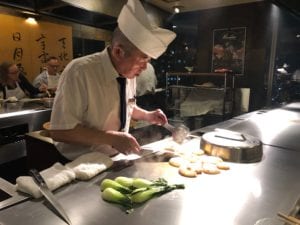 Roppongi is dripping with class; the Tokyo neighborhood where glamorous shopping malls and outdoor art centerpieces rub shoulders with a handful of Japan’s finest museums. In the background, casting its regal gaze upon the surrounding area, is the fiery spire of Tokyo Tower.

Standing at 333 meters, Tokyo Tower is the second highest man-made structure in the city, symbolizing the prosperity of post-war Japan. You can head up to the 150-meter observation deck via an elevator or a lung-busting staircase of 600 steps.

Of Roppongi’s museum collection, the Mori Art Museum is the most popular. A creative showcase for 21st-century Tokyo, the Mori Art Museum plays a central role in the celebration of contemporary art and architecture in Japan. The museum sits atop the Roppongi Hills commercial, dining and entertainment complex where you can also admire the 30-meter-tall Maman Spider Sculpture by Louis Bourgeois.

A ten-minute walk from the Mori Art Museum is the National Art Center, Tokyo, famed for its rippling glass facade and for hosting one of the largest exhibition spaces in the country. For classic Japanese antiques, head to the Suntory Museum of Art, in the Tokyo Midtown complex. 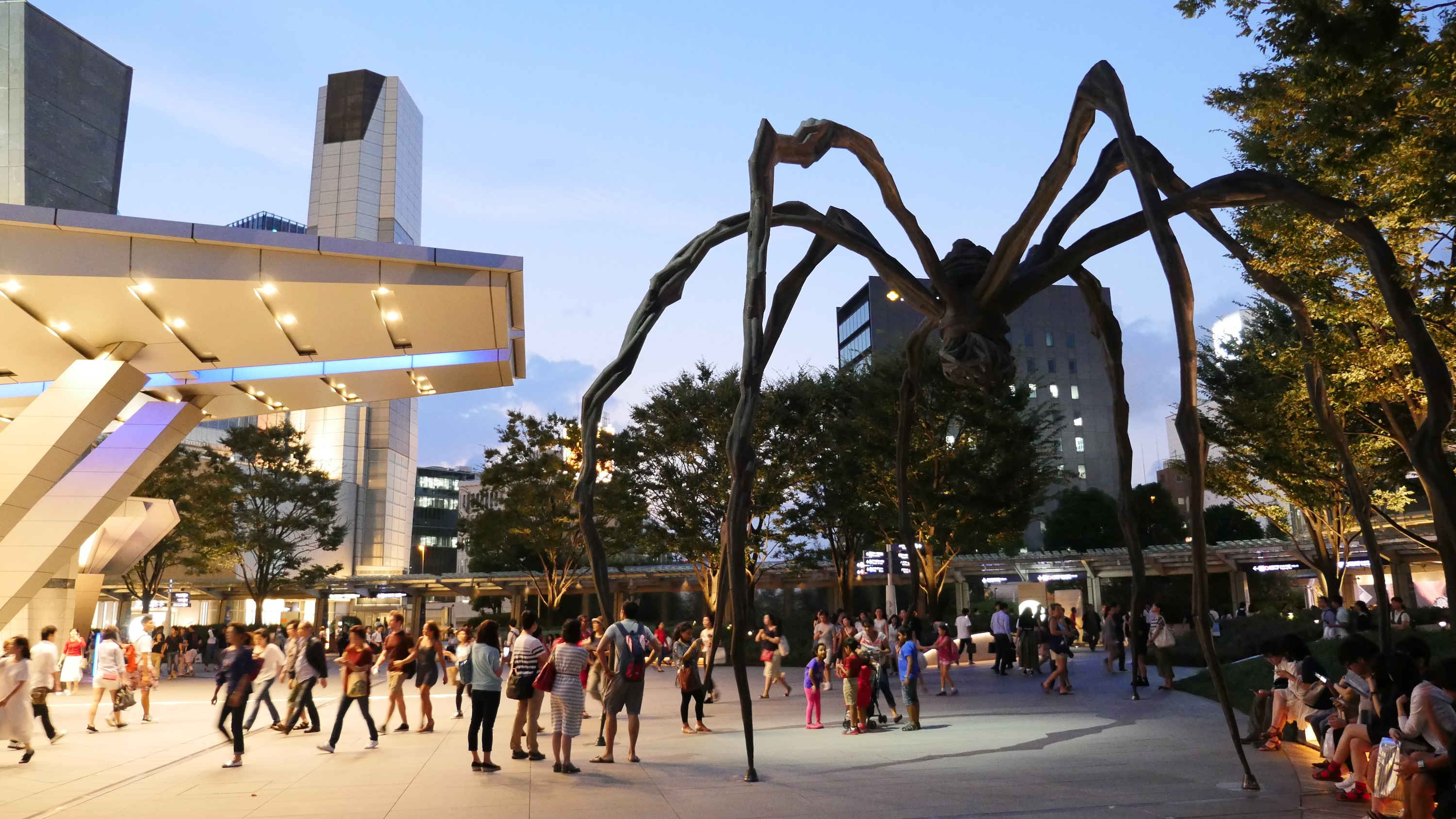 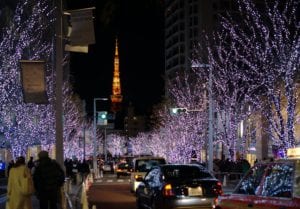 Tokyo Station, rather being a mere railway terminus, is often considered an area in its own right. It’s located a short stroll from the Imperial Palace, where the sitting Emperor of Japan still resides. What makes the Tokyo Station area one of the best neighborhoods in Tokyo to visit, is its diverse range of attractions.

At Tokyo Station, apart from being able to catch Shinkansen (bullet trains) to every corner of the Japanese archipelago, you can also indulge in some retail and culinary therapy. The basement-floor Ichibangai mall is home to Tokyo Character Street, a concourse of anime and manga (comic book) merchandise stores. On the ground floor, you’ll find Tokyo Me+, a sugary emporium of omiyage (Japanese souvenirs, often sweets). Tokyo’s largest ramen alley, packed with eight individual shops serving differing styles of ramen, is also situated in Tokyo Station.

If you’re in the Tokyo Station neighborhood, you should pay a visit to the Tokyo Imperial Palace East Gardens on the former site of Edo Castle (home of Japan’s militaristic dictators until 1868). Though access to the main section of the palace grounds is prohibited — it is technically a private residence — it provides a nice afternoon stroll over a carp-filled moat and past ancient castle foundations. 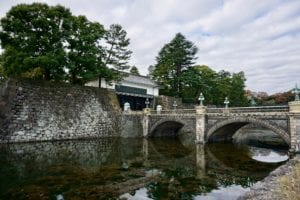 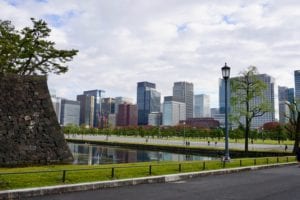 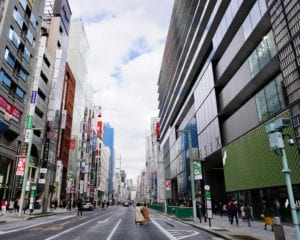 Tokyo’s Ginza neighborhood is the Japanese capital at its most ostentatious. It’s bisected by main shopping artery Chuo-dori and marked by impressive architecture such as the neoclassical Wako building; the rusted, LEGO-like facade of Nakagin Capsule Tower; and the gravity-defying V8 building.

Chuo-dori is lined with stores sporting the highest of high fashion brands, from Bulgari to Prada, along with boutique shopping malls, including Ginza Six and Matsuya Ginza. On weekends Chuo-dori prohibits automotive traffic, meaning pedestrians take to the lanes in the middle of the road for a picture-perfect and luxurious amble.

By night, Ginza’s bars are the gold standard in Japanese cocktail mixology, with 300-plus watering holes hidden in every nook and cranny of the central Tokyo neighborhood. Bar Orchard, which specializes in fresh fruit cocktails served in elaborate receptacles, and the accolade-showered Gaslight Eve, are among the best.

Though the world’s greatest fish market moved from Tsukiji to Toyosu in 2018, the old Tsukiji Outer Market is still open for business next door to Ginza. Simply put it’s one of the best places on the planet to eat raw fish. For another distinctly Japanese experience, catch a kabuki play at the Kabuki-za Theatre in Ginza (tablets providing translation of the performances are available). 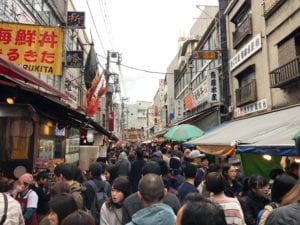 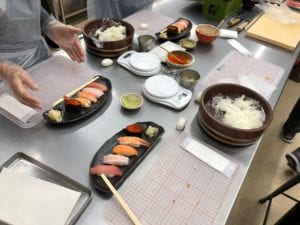 If this has whet your appetite for the Summer Games Tokyo 2021, check out Roadtrips’ exclusive travel packages here, and get the ball rolling on the trip of a lifetime.

David is a Northern Irish travel, culture and sports writer living in Tokyo. When he’s not bashing his head against a keyboard, he likes to travel, eat good food, drink good drink, play rugby, and butcher the Japanese language. David’s writing is at www.davidmcelhinney.com and more of his articles can be found on www.tokyoweekender.com/author/david-mcelhinney/ and www.metropolisjapan.com/author/davidmcelhinney/.

Other posts by David McElhinney »