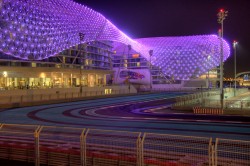 The Yas Marina Circuit is the location for this year’s Abu Dhabi Grand Prix, to be held from November 21-23, 2014. Opened in 2009, Yas Marina Circuit has many stunning and unique features that draw in drivers and spectators alike. Here are 10 of the most interesting facts about this amazing F1 circuit:

The first Abu Dhabi Grand Prix held at the Yas Marina Circuit had a 5:00 pm start time, the first time in F1 history that a race was held in the dark. The Circuit is not only equipped to hold events at night, but the track can also be sectioned into two tracks to run two races simultaneously.

The Yas Marina Circuit is one of the most technologically-advanced racing circuits in the world. It was also the most expensive to build, with an estimated construction cost of US$1 billion.

The Circuit was designed with four main acceleration periods including a 1173 meter acceleration, which is the longest of any F1 track in the world.

The pit lane exits cross under the circuit so part of the pit lane is below ground. Drivers have over 70 garages in two pit buildings, making it a superior circuit for drivers.

The Yas Marina Circuit can hold up to 50,000 spectators. There are four grandstands in total, and each is covered and shaded to protect race fans from the desert sun. This is the only covered seating F1 circuit, which helps to make it one of the best facilities in the world for spectators.

The Circuit features a 12-story, 499 room, luxury resort hotel over the race circuit. The five-star hotel is called the Yas Viceroy Abu Dhabi Hotel and it forms a bridge over the 18th and 19th turns. The hotel is the first ever built over a F1 circuit.

Although only 10 minutes from the airport, the Yas Marina Circuit was built on an island in the United Arab Emirates’ largest city Abu Dhabi, which also happens to the world’s richest city. Yas is one island of 200 that form the capital.

The Circuit has a VIP tower that sits at the start/finish line. Called the Sun Tower, it is 60 metres high and affords its guests a luxurious and panoramic view of the entire race track and surrounding features.

For hard core race fans, the Circuit also offers drag racing, off-road racing, and a kart center where you can put your own skills to the test. Or, if you prefer, you can attend their driving school and take your turn behind the wheel in a Formula Yas 30000 race car.

For race car enthusiasts, the Yas Marina Circuit offers the cutting edge in race circuit design, F1 racing at its best, and an unparalleled spectator experience. With the World Drivers’ Champion and World Constructors Champions named at the Abu Dhabi Grand Prix this November, you can be there to experience the action live. Contact us to book your trip now with Roadtrips!