An icon in the racing world, the tri-oval Daytona International Speedway is a regular host to racing events throughout the year. Located in Daytona Beach, Florida, it opened in 1959 and has been has been updated a number of times since its inception to continually improve the venue for its fans and drivers.

How Many Seats are there at Daytona International Speedway?

Daytona International Speedway boasts 101,500 seats in the front stretch. However, fans can also watch from the luxury suites as well as the infield, where many race fans will spectate the action from chairs atop their recreational vehicles.

Who has the Most Wins at the Daytona 500?

Who was the First Woman to Race in the Daytona 500?

Plans for the Daytona International Speedway began back in 1953, with NASCAR founder Bill France Sr. looking for an alternative to racing on the beach. The goal was to create the “World Center of Racing,” with a premier track to showcase the speed of the cars. France and his team designed the venue with a banked track, to allow for greater speed and also better sightlines for fans.

The brand-new speedway opened in 1959, first with a practice run on February 6, followed shortly after by the very first Daytona 500 which was witnessed by a crowd of 41,000. The track has undergone four major renovations, the most recent began in 2013 and was dubbed “Daytona Rising.”

What is Daytona Rising?

The speedway’s biggest update was completed in 2016 and was aptly named “Daytona Rising.” The $400 million renovation included 101,000 brand new, more comfortable seats, over 60 brand new luxury suites, social areas for people to congregate in the concourse, double the number of restrooms and significantly more concession stands. They also added a high-end lounge, Rolex 24 Lounge, providing an upscale viewing experience for fans and corporate events. In addition to the upgrades to the venue itself, a brand-new entertainment plaza was built across the street, featuring shops, a movie theatre, restaurants and bars, and a bowling alley.

The speedway unveiled the impressive completed project in early 2016, much to the delight of the fans. Remaining unchanged was the Daytona International Speedway’s commitment to making the race viewing experience the best possible for all of its loyal fans, and with engines roaring, there is no better place to be.

Watch the massive Daytona Rising renovation in this cool time lapse video of the upgrades.

What is there to do at Daytona International Speedway?

When you’re not watching the racing at the Daytona 500, there are plenty of other things to do and explore at the speedway.

Our pre-travel concierges are available to all of our guests to provide more detailed information on each year’s race week schedule of events.

What About Other Daytona International Speedway Events?

The Daytona International Speedway hosts a number of events in addition to the Daytona 500. Other popular race events include the Wawa 250 and the Coke Zero Sugar 400 in August. The speedway also hosts other types of competitions including motorcycle, truck, karting, and powerboat racing.

Is there a Daytona 500 Park and Ride?

Explore with the speedway before you see it for yourself. 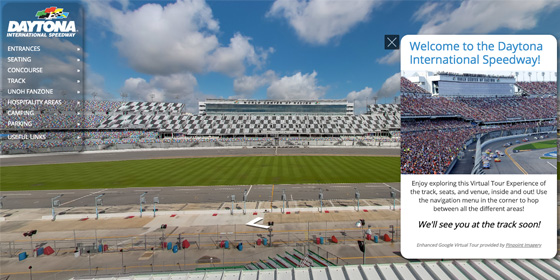 The weather is often ideal at the Daytona 500 but can vary from year to year. Our best suggestion is to check the weather forecast the day before and plan accordingly. Layers are a good idea; while it may be warm in the afternoon, it often cools off in the evening, especially when the race goes late due to delays. We recommend being prepared with sunscreen and sunglasses, as well as comfortable shoes. The speedway is big and you can expect a fair amount of walking throughout the day. If rain is in the forecast, bring a poncho. Umbrellas are not permitted at Daytona International Speedway.

What happens if it rains at the Daytona 500?

While some sports will play through in the rain, auto racing is simply too dangerous to continue in wet conditions. In the case of rain, a red flag will go up calling for a rain delay. Usually once the rain passes, the track will be dried by special vehicles and the race will resume. In rare cases, the race will be called early or postponed until the following day.

What time should you arrive at the Daytona 500 Speedway?

How early you arrive at the speedway is largely a matter of personal preference but typically a 2-3 hours prior is a good guideline if you want some time to soak in the full experience. You’ll want allow yourself enough time to get through the security lines, plus allot time for all the extras that interest you including midway, fanzone, time to explore the venue, and the pre-race ceremonies.

What are the best seats at Daytona International Speedway?

Unlike many sporting events where the more desirable seats are closer to the action, at the Daytona 500 typically the higher seats are regarded as superior as they provide a more complete view of the track. Those near the start/finish line are some of the most popular. For the ultimate experience, we recommend Daytona 500 Club Seating which provides ideal sightlines in the upscale surroundings of the club lounges. Club seating also offers great food, an open bar, and flat screen TVs so you don’t miss any of the action on the track.

How many laps are there in the Daytona 500 Speedway?

The Daytona 500 typically consists of 200 laps around Daytona International Speedway’s 2.5-mile tri-oval track. That said, there have been rare occasions where the Daytona 500 was completed after fewer laps due to weather. In addition, the Daytona 500 has exceeded 200 laps a number of times due to overtime finishes.

Why is Daytona 500 called that?

The Daytona 500 gets its name from the location and length of the race: a 500-mile race in Daytona, Florida.

What are the Daytona 500 stages?

Bonus championship points are awarded to the top ten finishers in each of the first two stages. A more detailed explanation on the Daytona 500 stages can be found here. The race is deemed to be offical after the first two stages are completed, which means in the event of bad weather the race can be called after this point.

What are the rules of the Daytona 500?

There is a long list of rules for all NASCAR Cup Series races, including the Daytona 500. The rules cover everything from how a driver wins the race to the regulations for each car. This video provides a good explanation of NASCAR’s rules.

How is the winner of the Daytona 500 determined?

The winner is typically the first person to cross the line after completing 500 miles, or 200 laps of Daytona International Speedway. The winner must possess skill and a fast car, but strategy and even luck play a factor as well.