It’s the grand finale of the Canadian football season and most of the country will be tuned in to see which team will earn bragging rights for the next year. The CFL season is always entertaining and the excitement peaks with the league’s biggest contest: The Grey Cup. The big game is always a good time and we’d love to be your host at this truly Canadian event. Roadtrips’ 2019 Grey Cup packages include first class accommodations, your choice of seating anywhere in McMahon Stadium, and an onsite host to ensure you’re fully taken care of while you’re away from home. Complete 2019 Grey Cup packages are available now from $1,435 per person.

At the 106th Grey Cup in Edmonton, the Calgary Stampeders made their third straight Grey Cup appearance, hoping for redemption after losses in the previous two years. The third time proved to be the charm as they claimed the championship over the Ottawa Redblacks in a rematch of the 2016 Grey Cup. In 2019, the Grey Cup will play out in Calgary. Will the Stamps thrill hometown fans by pulling off the repeat? Join us to find out at the 107th Grey Cup in Calgary. 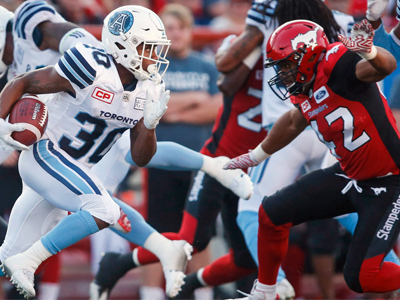 “It was nice to have things booked ahead of time”

This was a great trip. Tickets and events that we attended were great, it was nice to have things booked ahead of time. Without knowing the city it was great someone else could do the research for us.