Your 2019 Fiesta Bowl package includes your choice of tickets in State Farm Stadium. Whether you prefer to be on the sidelines close to the action or have a birds’ eye view from the upper level, your game day experience is yours to customize. Our Sports Travel Specialists can help you choose the right tickets from our seating categories below.

The annual host to the Fiesta Bowl, State Farm Stadium (formerly University of Phoenix Stadium) opened on August 1, 2006, and is considered to be one of the premier stadiums in the country. The venue boasts a number of unique features including a fully retractable natural grass playing surface that can be moved to the exterior of the building, via an opening in the stadium, to allow it to be exposed to daylight. The facility contains 63,400 permanent seats with capacity to add almost 9,000 more for major events. State Farm Stadium is no stranger to big games; it previously hosted the Super Bowl in 2008 and 2015, the Pro Bowl in 2015, and the College Football Championship in 2016. 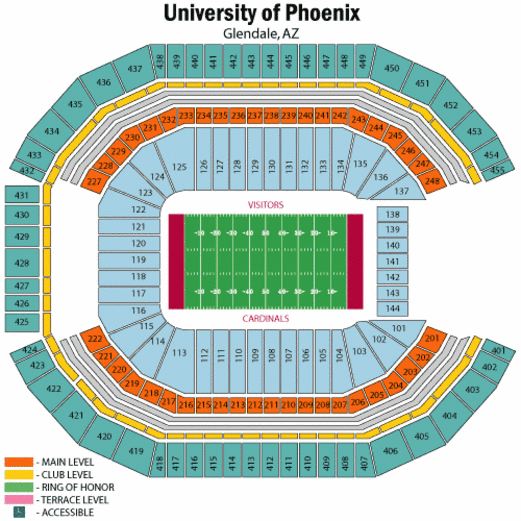 “Everyone was very upbeat at Roadtrips.”

The trip was fantastic! My Son and I had a great time and saw some exciting football. Roadtrips did a great job both on the front end working out the details and then the follow-up and completion of the itinerary and ticketing. Everyone was very upbeat at Roadtrips and we look forward to utilizing your teams expertise for another trip.