The Super Bowl is fast approaching and the excitement surrounding the big game grows exponentially with each passing day. Here at Roadtrips, we know how impressive of a spectacle the big game can be to watch in person, and we can’t wait to arrive in Miami with our guests and experience it all. If you’re not well-versed in the Super Bowl, just need a quick refresher, or want to entertain your Super Bowl party guests with Super Bowl history, facts, and trivia? Check out our Super Bowl LIV Ultimate Guide below.

What is the Super Bowl? 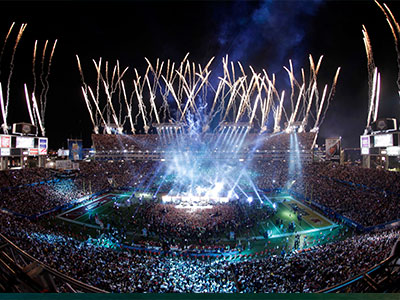 When is the Super Bowl?

This year’s edition of the Super Bowl (LIV) is on Sunday, February 2nd, 2020. The game takes place on the first Sunday in February.

What time does the Super Bowl start?

What Super Bowl is it?

Where is this year’s Super Bowl?

How much are Super Bowl tickets?

Super Bowl tickets fluctuate greatly. Tickets average between $2,500 – $3,000, although prices may change depending on when the ticket was purchased. For reference, just days before the last year’s game, the average ticket price was $4,380.

How long is the Super Bowl?

The Super Bowl typically lasts 3-4 hours, including the analysis shows before and after the game, and the game itself. A regulation NFL game consists of four 15-minute quarters. After the game’s first two quarters, there is typically a 12-minute intermission. This is referred to as halftime. However, the Super Bowl boasts an extended halftime period, upwards of 30 minutes.

What happens at halftime of the Super Bowl?

During halftime of the Super Bowl, the NFL typically presents an extravagant musical performance. In recent years, the halftime performances have featured popular artists such as Beyonce, Bruno Mars, and Lady Gaga.

Who is performing at the 2020 Super Bowl?

Performing at the 2020 Super Bowl halftime will be Jennifer Lopez and Shakira. With the game played in Miami, the performances are likely to have a Latin flavor with Lopez and Shakira. It is also likely that the duo will have special guests as part of their show.

How many people watch the Super Bowl?

Super Bowl viewership on television has seen a decline in recent years. According to the research firm Nielsen, in 2019, the Super Bowl was watched on CBS by 98.2 million people. It marked the lowest number since 2008, when just over 97 million tuned in. However, CBS reported streaming platforms added an additional 2.6 million viewers. Outside of the United States, various news outlets place the estimate at around 50-60 million viewers.

When was the first Super Bowl?

Who played in the first Super Bowl?

The first Super Bowl was played between the AFL champion Kansas City Chiefs and the NFL champion Green Bay Packers. The Packers would win the game by a score of 35-10. Green Bay would go on to win the Super Bowl again the following year, this time against the Oakland Raiders of the AFL.

What do the Super Bowl winners receive?

The winning team of the Super Bowl is presented with the NFL championship trophy, more commonly referred to as the Vince Lombardi trophy. Lombardi led the Green Bay Packers to victory in the first two Super Bowls. Upon his death in 1970, the NFL named their trophy after the legendary head coach.

Additionally, a player from one of the participating teams of the Super Bowl is selected as the game’s most valuable player. The M.V.P. typically is chosen from the winning team but there has been an instance of a player on the losing team winning the award. This occurred in Super Bowl V when Chuck Howley of the Dallas Cowboys was selected the M.V.P. of Super Bowl. The Cowboys lost the game to the Baltimore Colts by a score of 16-13.

Why does the Super Bowl use Roman numerals?

The Super Bowl has used Roman numerals since Super Bowl V, which took place in 1971. Lamar Hunt, then owner of the Kansas City Chiefs, is credited with introducing the idea. The initial four Super Bowls were retroactively changed to reflect the move to Roman numerals.

Since 1971, the only Super Bowl to not feature Roman numerals was Super Bowl 50.

What team has won the most Super Bowls?

The most Super Bowl wins by a single team is six. Two teams share the mark, the New England Patriots and the Pittsburgh Steelers. The Dallas Cowboys and San Francisco 49ers each have five Super Bowl victories of their own.

Which teams have not won a Super Bowl?

There are 12 teams that have yet to win a Super Bowl. They are the

Of the 12, the Browns, Lions, Texans, and Jaguars have yet to make an appearance in the Super Bowl.

Who has appeared in the most Super Bowls?

Who has the most Super Bowl losses?

The New England Patriots and the Denver Broncos have lost the most Super Bowls with five a piece. The Minnesota Vikings and the Buffalo Bills each have suffered four defeats in the Super Bowl. Both teams are 0-4 in Super Bowl games.

Which player has won the most Super Bowls?

The player with the most Super Bowl wins is Tom Brady, quarterback for the New England Patriots. Brady has six Super Bowl wins in his career. The next highest total is five Super Bowl victories by Charles Hailey. Hailey won twice with the San Francisco 49ers and three with the Dallas Cowboys.

Which coach has won the most Super Bowls?

Which player has won the most Super Bowl M.V.P.’s?

Of the 53 previous Super Bowls, the M.V.P. award has been given to a quarterback on 29 occasions. The next closest position groups are the running backs and wide receivers who have won seven a piece. Super Bowl XII saw co-M.V.P. winners as Harvey Martin and Randy White shared the honor when the Dallas Cowboys defeated the Denver Broncos.

How is the Super Bowl M.V.P. selected?

The Super Bowl M.V.P. is selected by a vote of 16 media and broadcast members at the game, in addition to a fan vote conducted during the game. The fan aspect was added to the voting process during Super Bowl XXXV in 2001.

Media voters are asked to vote in the game’s final minutes and are allowed to nominate one player from each team.

Would you like to experience the 2020 Super Bowl? We’d love to help you get there. Contact one of our Sports Travel Specialists to see what your ultimate sports travel experience could look like.

Ryan Adverderada is currently the Managing Editor for Full Press Coverage Arizona Cardinals and Full Press Coverage San Francisco 49ers. He has covered the NFL for various sites such as Full Press Coverage, Cover32, and Pro Football Guru. Ryan spent three years working in the Promotions department and as an online contributor for the ESPN Radio affiliate in Hawaii, KKEA 1420AM.

Other posts by Ryan Adverderada »