During the past decade Japan has grown into one of the world’s top travel destinations – helped in no small part by hosting a series of global sporting showcases, including the upcoming 2021 Summer Games in Tokyo. The Japanese capital’s electric cityscape, UNESCO-recognized culinary heritage, quirky subcultures, and rags-to-riches history put it atop many Americans’ travel bucket lists — a trend expected to continue.

During this meteoric rise, Japanese cultural differences from the western world have reached a point of cliché: the unfailing punctuality of the Japanese people, the efficiency of the transport network, the politeness of the locals and their inference on customer service, or how restaurants and bars – when you can finally locate them – exist on a charmingly miniature scale.

But there is a reason such clichés exist. Japan was closed off to the rest of the world for over 200 years from the 17th to 19th centuries – known as the Sakoku Period – during which time the nation simmered exclusively in its own culture, free from the hands of outside influence. As such, Japanese cultural norms developed in a singular fashion, much of which is still apparent today.

When comparing Japanese culture vs American culture, the primary differences stem from the diametrically opposed foundations upon which Japanese and the US society were built: collectivism vs individualism. This is the root cause of the cultural differences you’ll need to consider when visiting Japan on your travels. 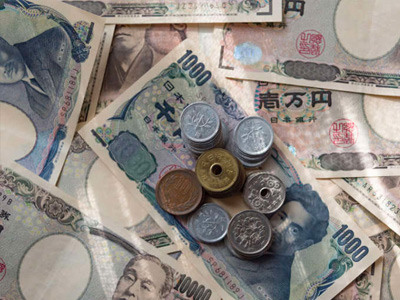 Japan may love robots, electronic toilets, and neon-flanked highways, but its high-tech image is, frankly, a bit of a misnomer. At the level of general business infrastructure – which includes cashless payment systems – Japan is actually lagging quite far behind the US and the rest of the developed world. 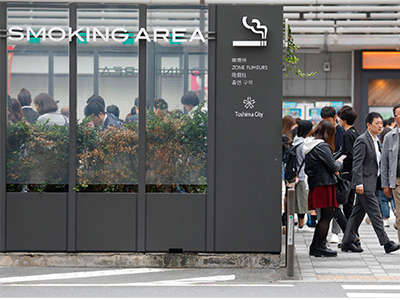 One of the most bizarre cultural differences between the US and Japan are the laws around smoking. Restrictions on smoking indoors were recently implemented in Tokyo with a view to the since-postponed 2020 Summer Games (rescheduled for July 2021).

However, in smaller bars and restaurants in the capital it’s not uncommon to wine and dine in the company of plumes of tobacco smoke — and beyond the prefectural borders of greater Tokyo, you’ll find yet more smoke-friendly restaurants.

Contrary to the United States, smoking outside is also a social faux pas, if not outright forbidden as it is on the streets of Japan’s major urban areas. Rather, you’ll see – or smell – designated smoking areas which sit on street corners as open-air booths. Alternatively, smokers may be directed to small ventilated rooms within restaurants or deep within the bowels of buildings.

Where Are All the Trash Cans? 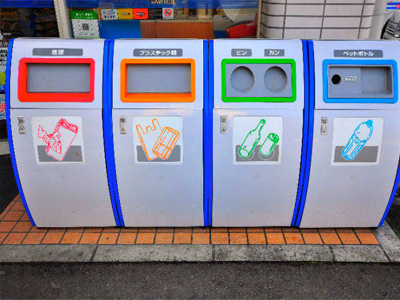 Japanese trash cans are great… when you can find them, that is. Drift by tourists on the streets of Tokyo and you’ll soon hear one of the most commonly voiced chagrins: “How are these streets so clean, yet I can never find a trash can?” Though public trash cans have slowly begun to appear, their scarcity is still apparent.

In Japan, it is typical to sort your own trash – of which you’ll often gather a lot thanks to the surplus of convenience stores and vending machines – before bringing it home to deposit in the correct waste bins. Nowadays, in certain train stations and most convenience stores, you’ll find trash cans marked with Japanese script and an accompanying picture indicating what goes inside: PET bottles, cans, glass, burnable waste, etc. 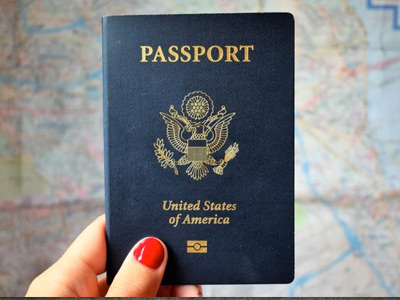 One of the cultural similarities between the US and Japan, though it’s only effected upon visitors, is the mandate that all legal aliens must carry a passport on them at all times. This may seem a little austere, and is no joy for the traveler who tends to leave things astray, but it is a rule and the local police are permitted to detain any who breach it.

The Japanese police are not guaranteed to speak English to any degree of competence, meaning the process for engineering your exit back out of the precinct will likely be long and laborious. Additionally, during global events, Japanese police tend to patrol in greater numbers and are known for carrying out random ID checks.

So just to reiterate: Carry your passport. 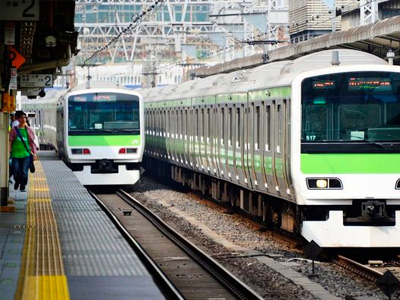 Train etiquette is one of the most obvious examples of the differences in western individualism and Japanese collectivism. In Japan, people tend to avoid acting in any way that may be deemed insensitive, offensive, egregious, or even mildly off-putting to those around them. Japanese people tend to focus on maintaining the ‘wa’ – the collective harmony; the social order.

What this means in practice – on trains at least – is carriages crammed full of people which lull along the tracks in almost complete silence. To help maintain this atmosphere of ‘wa’ when using Japan’s public transport system: refrain from eating, drinking, talking loudly, sneezing, and be sure to turn your phone on silent; basically, do as the Japanese do.

There is a rare story one hears in Japan, usually whispered in hushed tones by someone who’s been privy to that most unusual of scenarios: the Japanese waiter who accepts a tip. Though it would be disingenuous to say this never happens, your chances of spotting a leprechaun at the end of the rainbow are approximately as high.

If you simply cannot resist the urge to tip, expect to get chased down the road with a handful of yen coins rather than the recipient staff bowing graciously as they accept your generous imbursement. This is arguably the biggest difference in Japanese and US social etiquette. But don’t let it concern you, Japanese restaurant and bar staff are typically well compensated by their employers, and view tipping as unnecessary rather than downright rude.

Communication Can Be Indirect 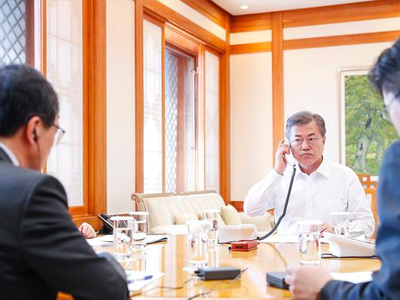 Mastering the dark arts of Japanese communication has baffled foreigners since they first began to arrive en masse in the late 19th century. This is largely due to Japan’s indirect methods of communication and even their body language – a holdover from the days of the samurai when maintaining peace was priority number one – which stands in stark contrast to the more up-front and personal style of communication in the west.

And it’s not just the gaijin (foreigners) who find it confounding. When Emperor Hirohito broadcast live Japan’s surrender in WWII, he used such an archaic and indirect form of the language that many weren’t entirely sure of what he was saying.

In any case, when you get a response to a question along the lines of “it might be difficult” or “I’ll think about it”, this is often shorthand for no. Or maybe it’s not. You may have to read between the lines. 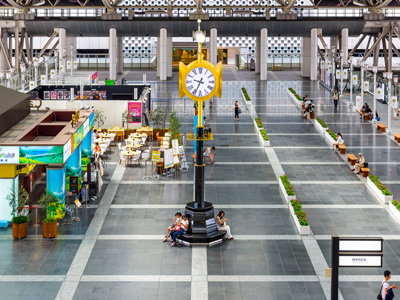 Japanese people, particularly within Japanese business culture, see punctuality not as a mere sign of respect, but an unequivocal virtue – to the extent they’ll sometimes arrive for meetings precisely at the agreed upon time, not a minute early or late. So, just bear in mind, showing up when you please in Japan may be considered more disrespectful than in other parts of the world. This is not to say all Americans forego timekeeping, but rather to reinforce the point: the Japanese take punctuality very, very seriously.

Case in point: trains in Japan are almost always on time. Ultimately there is still a margin for human error, such as the story which made international headlines in 2017 when the Tsukuba Express Line management apologized profusely for a train that departed 20 seconds ahead of schedule. Few train networks in the world however, could claim to be quite as efficient or punctual as the Japanese system.

Omotenashi – The Art of Customer Service 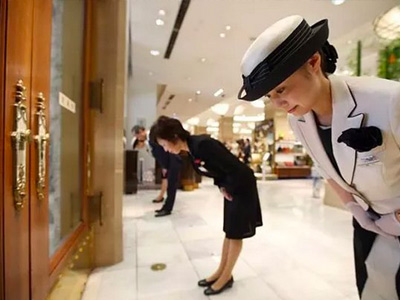 Omotenashi is one of Japan’s many untranslatable terms. But generally, it’s ascribed to the country’s famed customer service; something hinged upon rigorous protocol which has been tuned over the centuries into a fine art. It’s another component of Japanese culture which is, in its own way, singular — and it is apparent everywhere.

Think it of omotenashi as predicting the customer’s needs before he/she knows what said needs are: hot towels in winter or cold towels in summer on arrival at a restaurant, store clerks who greet shoppers with the most courteous Japanese phrases (known as “keigo” – respectful language) and deep bows, or slippers to use in the bathroom when you’re in a no-shoes establishment. Omotenashi focuses on the little things, which often make all the difference.

Toilets of the Future 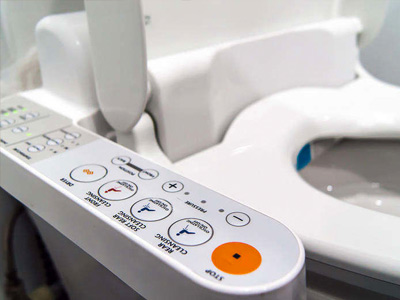 At first, Japanese toilets can seem wildly complicated and may come as a culture shock. Many foreigners, more familiar with the standard chain or lever system, find the control panels with flashing buttons overwhelming. However, most buttons come with fairly explanatory photos, and if in doubt, look out for “大” (big flush) and “小” (little flush). Also feel free to fiddle around with the controls – there is no ejector seat button.

Once you become well-acquainted with the electronic Japanese toilet and its jets of water, in-built nature soundscapes, and multiple flushing options, returning to your old model may fill you with melancholy. But you take solace in the fact that you’re not alone.

Now that you are well versed in the cultural differences between US and Japan — though you will no doubt discover some more along the way — join Roadtrips in Japan for our highly anticipated 2021 Summer Games Travel Packages. Our exclusive, experiential plans will help you get the most out of a once-in-a-lifetime Summer Games vacation.

David is a Northern Irish travel, culture and sports writer living in Tokyo. When he’s not bashing his head against a keyboard, he likes to travel, eat good food, drink good drink, play rugby, and butcher the Japanese language. David’s writing is at www.davidmcelhinney.com and more of his articles can be found on www.tokyoweekender.com/author/david-mcelhinney/ and www.metropolisjapan.com/author/davidmcelhinney/.

Other posts by David McElhinney »